Examining the world around us reveals a pattern that is becoming increasingly common in our reality. Exponential growth is everywhere. We observe exponential growth in our technological process,7 population growth,8 the spread of pandemics,9 and throughout the evolution of life in the universe.10 Exponential growth is when a unit of measure grows by its present value or doubles. When this trend occurs consistently over time, the speed of progress increases dramatically, so much so that it’s difficult for our brains to conceptualize it accurately. Nuclear physicist and professor emeritus Albert Bartlett is quoted as saying, “The greatest shortcoming of the human race is our inability to understand the exponential function.” It is easier said than done—exponential growth doesn’t directly correlate to our lived experience. The human time experience is rooted in a biological machine where expiration is inevitable. Our frameworks of time as a tool of organization rely on the Earth’s rotation around the Sun, and our bodies need rest. Sleep, in itself, reinforces linear perception. We return to nothingness, only to begin the next morning anew.

Our past is inaccessible, and the future is unknown. Yet we possess memories that we believe to be perceived events. There is a continuity to life in the present. For us, change and progress are incremental. But that does not apply to our creations. This type of change is best understood through visualization. Figure 1 illustrates how exponential growth feels slow until you break past the knee of the curve, at which point progress accelerates rapidly in frequency, scale, and degree. As a child of the mid-1980s, I share the generational perspective of knowing the world before the internet and being in it within the immediate present. The world is changing faster than ever before. Children born into the world today will never know anything beyond exponential growth. We are coming close to crossing that threshold and now must question who we will be when that moment arrives.

Moore’s Law is a trend where humanity is able to double the number of transistors on a microchip every two years. More transistors create more parallelism, allowing multiple things to happen simultaneously. The more tasks we can execute at the same time, the faster we are. Over the past forty years, this has been the driving force behind much of our technological progress, but that era is coming to an end. Physics, as we understand it today, is limiting us; our silicon-based transistors can’t get much smaller than they are now. Fortunately, researchers have discovered a great opportunity to increase speed through software, algorithms, and chip architectures. Code optimization to take advantage of chip hardware can maximize the benefits of parallelism, creating speeds up to sixty thousand times faster.11 Each new innovation in processing power opens new doors for previously unavailable or unimagined advancements.

Productively, exponential growth is the primary focus of present-day tech start-ups. Software is scalable, which means it can increase its functionality and capacity depending on user demands. Scalable technologies also typically have inverse ratios between their costs of operation and profitability; after a certain threshold, the cost of onboarding new users is negligible—it’s almost all profits. Organizational scalability also empowers a rapid monopolization in the productive vertical.

Inventor and futurist Ray Kurzweil has written several books exploring the concept of exponential growth, extending Moore’s Law to all technologies as well as biology. He maps out time periods between the evolution of more complex life forms.12 Starting from single-celled organisms, he demonstrates that the progress of complex life follows an exponential growth pattern. Similar to his findings on technology, the intervals between the emergence of new life forms become shorter with each milestone. In The Singularity Is Near, Kurzweil details the data behind human progress and how our major technological advancements follow an exponential growth curve, arguing that in the near future (2045), we should reach a technological singularity—a moment where we multiply our effective intelligence a billion-fold and merge with the intelligence we have created. From this point on, the future becomes difficult to determine. Kurzweil believes it will usher in an era of radical progress for humanity, where machines elevate our experiences beyond anything presently available. His vision of the future is optimistic and certainly possible—if the systems we organize ourselves with allow for it. If not, the benefits are likely to be available only to a small minority or not at all.

Exponential growth is a function of our universe, which also happens to be expanding exponentially.13 Our understanding of physics tells us that the universe’s rate of expansion should slow down over time because things are moving farther apart, which decreases the density of mass and the energy fueling expansion. Scientists have developed theories about dark energy, the latent energy existing in the vacuum of space. Dark energy expands in relation to the universe, so if the universe were to triple in size, so would the total amount of dark energy. This relationship between dark energy and the size of the universe creates the scenario where the larger the universe becomes, the faster it accelerates. Dark energy may or may not be the cause of this expansion. Human cosmology is a field in its infancy, forever limited by the moment in time we occupy—but it is widely accepted today. Just as we observe exponential growth at the cosmic scale, we also observe it in microorganisms.14 Exponential growth is very relevant to our experience of time within the immediate present.

We’ve explored how exponential growth occurs in the productive systems we build, in our collective technological progress, in the biological evolution of life, and within the cosmological expansion of our universe. So how does it apply to the individual time experience? Self-actualizing in the age of crisis requires an emergent leap in both individual and collective consciousness. Linear progress is not enough to avoid the crisis, so we must choose to become more than we are.

The most vital area of human expansion within our immediate present is imagination of the possible. Without it, we have no hope, no alternatives other than the very systems and beliefs driving us toward the crisis. Observing exponential growth in nature and technology shows us that the nature of change is changing, and we must adapt. Our exploration of alternatives is rooted in an extreme belief in individual and collective human capacity. We can progress exponentially in an alternative direction, but only if we choose to. We speed up our processes and progress while conserving the complexity of our creations. Even redirected exponential growth will seem incremental from the perspective of the human time experience. However, the degree and intensity at which change manifests will not. Exponential growth is part of our experience of the moment, an aspect of our universe we must quickly become more intimate with. 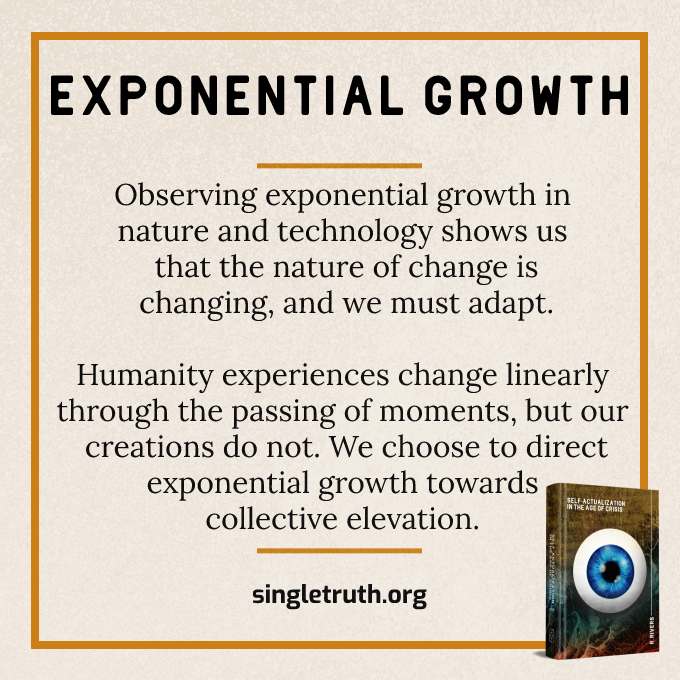 Next Section:
The Universe Has a History
Next ➤