The Universe Has a History

To embrace your personal time experience as divine is no small task, but it is rooted in our present scientific knowledge. Time is real. It is not a product of the physical universe and did not emerge from the events of the big bang. All events occurring in the history of the universe imply change, and change within a moment requires time. The human experience is that of fractional observation, the perception and awareness of momentary realities forming the long event chains that make up our personal and shared experiences. As William Faulkner wrote in Requiem for a Nun, “The past is never dead. It’s not even past. All of us labor in webs spun long before we were born, webs of heredity and environment, of desire and consequence, of history and eternity.”

In the book, The Singular Universe and the Reality of Time, philosopher Roberto Mangabeira Unger and physicist Lee Smolin propose a reorganization of science and thought to help humanity transcend our present understanding of the universe and ourselves. Cosmology and physics have static sets of principles. These unchanging laws are the foundations that we build science upon, but here they identify conflict. Our scientific understandings do not support the idea of a static universe.

The Planck Epoch refers to the first moments of the big bang—the immediate present of creation and all that came from it. The laws of physics, seemingly immutable in our immediate present, were different in those moments. The universe was superheated and existed in unity; it was whole. As it cooled, the forces separated into the rules governing our reality and then into the states we now understand. There has never been a moment where the universe we inhabit has not been changing.

One direct conflict with this conclusion is that many twentieth-century theories work all the time and do not change. General relativity, quantum mechanics, quantum field theory, and the standard model of particle physics all have yet to fail an experimental test.15 So how does the individual embrace a universe of perpetual change when the core laws of our experience are so consistent? The answer is relevant to both our individual and systemic actualization.

As human beings, we tend to think of the world in systems. Thinking in this way helps us to cultivate, develop, and share knowledge with those around us. Organizing processes in a way that is both repeatable and reliable helps us learn and advance new techniques, continuously furthering human progression. It instills an almost mechanical perception of the universe; we project the success of local systems onto the totality of the universe. An error rooted in our experience of time leads us to incorrectly assign an element of naturalness to our creations. In doing so, we ascribe to our discoveries a past they never earned, methods of thinking that unintentionally create barriers to progress, giving malleable objects a rigid form that we hesitate to question once established.

Physicist Lee Smolin argues that our scientific institutions’ adherence to the fixed laws of the universe is stifling our progress. We assume that because our natural laws work perfectly in our stellar location, they apply elsewhere. For example, gravity might function differently throughout the universe. The binding of scientific research to unreliable funding sources enforces specific priorities in the scientific community. We fake progress instead of embracing ignorance. Our error is not attempting to make sense of the world but assuming that all of our observations must make sense. Smolin concludes that all cosmology should be approached as a study of independent subsystems within the universe, no two of which are alike.

In 2018, physicists began arguing that we are not living in the first universe.16 Before the big bang, there was a prior universe, and likely a near infinite cycle beyond that one. The team presented strong observational evidence of long-dead black holes in the cosmic microwave background. Universes are born and die one after another, and black holes can survive the expiration and exist in new universes after expansion. The discovery argues that traces of these black holes are visible in our data. In other words, we can observe black holes that have been dead for longer than our universe has existed.

Science tells us that before the universe, there was something. It is a stark contrast to the historical theories of creation, theological and other, that have so long dominated human consciousness. This is especially problematic for the prevalent religions of the moment because it disproves one of the most fundamental assumptions of our universe being created from nothing. Science can evolve, admit it was incorrect, and redirect its focus and energy. Our existing spiritual technologies do not have this luxury and are further discredited in their viability and framing of being. It is why attempting to self-actualize under these frameworks of meaning and value will always fail in the face of the crisis. Our efforts with this exploration are not intended to establish a religion but rather a nonreligious meaning and value technology founded on new principles transcending the time experience while remaining open to change in the future. Our knowledge of the universe as having a history fundamentally reshapes our understanding of nature and our place within it.

Understanding that the universe remakes itself opens up many new questions, for example, when and how the process began. At this stage in our time experience, we cannot accurately answer that question. For a universe to evolve, there must be something before it. Smolin believes that the new universe likely operates under laws influenced by the universe preceding it. The theory is that, like a human parent, a universe will pass traits of itself to its progeny. For example, a universe might come into being with slightly different degrees of nuclear forces or gravity. Scientific critics have called the concept untestable, but this assumes that all information is within humanity’s grasp. Incorrect. There are plenty of examples we might consider of conceptualizations we understand in theory but can never fully realize in experience.

Consider the mantis shrimp. These animals have up to five times more color-receptive cones as humans. Their vision draws from sixteen primary colors instead of the three available within human experience. Now try to imagine what the world would look like with sixteen colors. It is impossible because we do not know what we do not know. Therefore, we should not assume that because something is out of our grasp, it cannot be accurate. It seems equally likely that this succession of universes once had an origin point as it is to imagine that evolving universes are infinite without beginning or end. The human time experience always exists in relation to the moment; our lack of capacity to prove something has proven time and time again to be temporary. In the case of the universe, we may never know. Still, given that our experiences are finite, we must choose a direction. Self-actualization in the age of crisis embraces the knowledge of the universe as infinite transformation and seeks to align our individual philosophies and collective systems around these core concepts.

The universe having history means everything can change because nothing has ever not been changing. There are limitations within physical forms and our present time experience that resist this, so it’s difficult to embrace it if we only consider it from the present moment. However, the time experience is a web of event chains extending far back into history. Inhabiting an ever-changing universe forces us to consider that given enough information, technology, and cooperative effort, nothing would be beyond our ability to reshape. Unger argues that this includes reconsidering the universality of mathematics, a foundational element of our sciences often thought to be natural, and should now be considered a system removed from nature. Mathematics cannot have the final say in determining what is and is not within the universe because it is our creation and is always subject to the limitations of our time experience. Humanity harbors powers and capacities well beyond our imagination, and there is no pathway to self-actualization without first understanding this transcendent reality. Our inability to fully express this power in this moment doesn’t absolve us from applying the philosophy to our individual and systemic organization.

The combination of the changing nature of time and changes in our perception of universal history catalyze creation. Whenever necessary, we evaluate circumstances by considering the long event chains that brought us to the present moment. We must also understand that our imagination offers plenty of alternatives if we’re willing to explore. This thinking represents a substantial departure from present-day solutions to the crisis that intend to prolong the systems already dying so that a small few might benefit. An ever-evolving universe supports our embrace of higher time sense, focusing our awareness on the perpetual moment. It provides scientific support for our reimagination of ourselves and our systems in our efforts to transcend. We can always become something radically different from the present if we direct our focus and energy within the moment. This is true for both individuals and the collective.

That the universe has a history is a source of radical self-empowerment in our individual and collective journeys toward self-actualization. It teaches us that the most common historical narratives of power and divinity are false, that we are manifestations of an infinitely evolving universe whose power lies within us. Absolutely nothing in our world is removed from change, from our personal challenges to the systems that reinforce ways of thinking. The universe’s history of perpetual change diminishes all arguments for maintaining what is based on histories of practice. No system, technology, philosophy, or tradition is natural or necessary in this world. The age of crisis is upon us, but despair should never enter our minds. It is absolutely within our power to change our trajectory. We are extensions of a grand cosmic intelligence—ever expanding, ever-evolving, each of us expressing and receiving information from a unique vantage point. 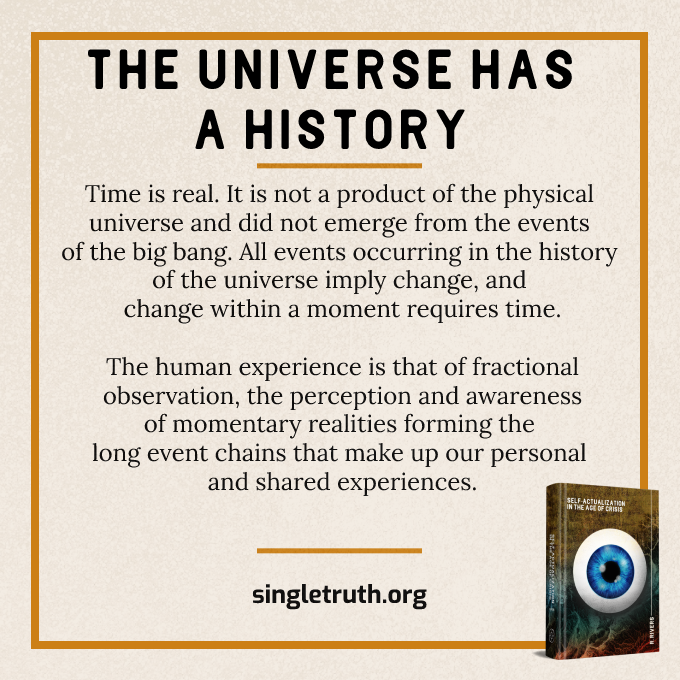 Next Section:
The Changing Nature of Time
Next ➤