Systemic actualization is a journey toward a divine expression of humanity for the majority. It is at the same time a firm rejection of the existing orders that have propelled us into the age of crisis. Here lies a conflict that must be addressed within the present global order, one that has perpetually eluded the human observer attempting to free themselves from unjust and immoral organization. Governments and the oligarchs who direct them possess many weapons and individuals willing to use them against others in order to maintain the status quo. Nowhere in the world is this more apparent than the United States, whose military conquest destroys nations and cultures for the benefit of corporate profits. When resistance occurs internally, the police are used to violently quell protesters, happenings that are so frequently documented on video that they are beyond a doubt aggressive overreach. This is not to say that there are not genuine use cases for internal security and military, but in our immediate present, they are twisted images of their stated intentions. Our journey toward merging system and self is a threat to those who benefit from the present arrangements, the same who maintain political control over our police and military.

Because security is necessary for individual actualization, we’ll explore how local and national security can take shape within a systemically actualized society. We are creating something new; systems separate from their present purpose and values. The most direct path toward individual and collective security is through the expansion of human rights and dignities. Through national and global public works, we raise the collective floor for everyone, removing the barriers to access and agency imposed upon the majority through our present arrangements. Expanding access to the resources provided by eight dignities will reduce crime and violence. 56-60 Beyond that, we must possess the courage to see our circumstances for what they are and exercise imagination toward what they can be. Given our history, it may seem as though it would be impossible for humanity to ascend to a state of being beyond violence. It is absolutely possible should we choose it; however, that is not the focus of our exploration. Reshaping our understandings of security and military to align ourselves with the single truth is.

We must also consider the individual. We recognize that everyone occupying these positions is an individual observer inhabiting a unique time experience, just like everyone else, shaped in large part by the context of their circumstance. If someone is playing the role of police or soldier within the immediate present or the past, there was never any alternative. Our exploration and critiques of the present arrangements are in no way a reprimand of any single individual participating within them in this moment. It is in many ways a deep concern for them. These components of our societies erode the soul of humanity and are major contributors to the acceleration of crisis.

It should be noted that I, like many, come to this moment with a specific perspective of the police officer and soldier. A nineteen-year commitment to the practice of Brazilian jiu-jitsu has provided me with a broad network of training partners entrenched in these institutions, many of whom I consider friends. Like most of humanity, the majority of them are individuals whose intentions are to do good for their families and communities. They also inhabit a unique time experience influenced by event chains leading to the immediate present. They share in our collective limitation of only ever being here now and are shaped by the very systems that give rise to our rejection. With that said, there is no denying that the two occupations are destructive and traumatizing to humanity, both for participants within them and those impacted by their wrath. Through these systems, we program people to develop perspectives of extreme otherness, dehumanizing the criminal or the enemy combatant so that we achieve compliance or dominance without remorse. These practices conflict directly with the core values we embrace in alignment with the single truth and are therefore incompatible with self-actualization in the age of crisis. 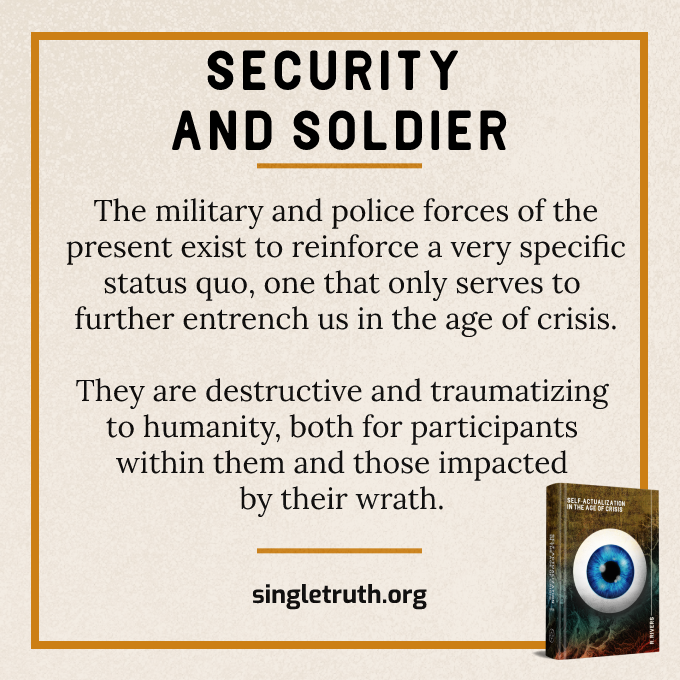 Next Section:
Military Industry
Next ➤