The crisis of information, truth, and trust results from organizing human interaction and information flow around transactional relationships. Humanity has long struggled with how to best leverage available information within a relational universe. The evolution of our communication technologies has empowered faster and more effective communication than our ancestors imagined possible. Yet the majority of these innovations have been developed with the intent of encouraging transactions. Next-generation connectivity platforms have adopted the same playbook as similar technologies past; capital dictates what messages are spread to whom. Throughout human history, our relationships with others and the systems surrounding us have been fragile because there is always a risk of subjugation when interacting with them. Today these relationships are eroding more rapidly. We are losing trust in others, our institutions, and ourselves. Here we examine the depth of the crisis of information, truth, and trust to identify root causes and misalignments with the single truth and the relational universe.

The crisis of information, truth, and trust is not a recent phenomenon; however, its impact on the individual has dramatically accelerated over the past thirty years. Media outlets have always been a tool of corporations and political parties. There have been few, if any, points in our time experience where Americans were receiving unbiased news. As the mid-1800s journalist William Gienapp explained, “The power of the press consists not in its logic or eloquence, but in its ability to manufacture facts, or to give coloring to facts that have occurred.” Journalists preferring to create narratives instead of reporting on them have long shaped individuals' beliefs. By the mid-twentieth century, wars, regulations, and bipartisan consensus on social protections led to a more objective presentation of the news in the United States, a trend that began reversing with the 1987 repeal of the Fairness Doctrine.43 Afterward, commercial news networks quickly transformed into propaganda centers seeking to continually push the boundaries of belief within their audience to better capitalize. Before the advent of social media, these channels were somewhat restricted. Not everyone could access them via their providers, and content aired at specific time frames that could be easy to miss. Following the exponential growth of communication technologies, news shifted to a distribution model favoring optimizing content for virality. This method of information distribution intends to draw emotion from sensational headlines and increase clicks. it’s a method of information distribution that seeks to prey on emotion to generate profit.

This sensationalist approach has an inherent flaw: the boundaries of what is shocking and attention-grabbing must be continually pushed in order to remain effective. The result is an increasingly rigid polarization of the population.44 Information channels train the individual to view others as different and threatening in order to sow collective discord. A focus on differences prioritizes a handful of fringe issues while intentionally avoiding the root causes of why material struggle continues to spread. Corporate news has become synonymous with disinformation and division, straining our ability to tell reality from falsehoods, resulting in widespread erosion of trust in information sources.

Over time, these narratives fester into manifestations of dominion ethos where anything beyond the scope of individual preference is false or fake. Through the perpetual stoking of fear and anxiety, they create a perpetual boogeyman of those with alternative visions of the good. Over time, the narrative becomes more than an information stream; for many, it becomes an embodied identity. Companies are profiting from creating time experiences where the individual actively works against their personal health, economic, and political interests under the guise of defeating an invisible other. It is an immoral and manipulative process that is willing to harm the many for the material and political benefit of the few, a shortsighted approach to profiteering that disregards our oneness with the relational universe. This proliferation of rigid systems of belief and value conflicts with our understanding of the relational universe, driving us further out of alignment with the single truth.

History teaches us that when the individual time experience exists within a state of scarcity and anxiety, authoritarian leaders are a likely outcome. Our present observations show us that even if authoritarianism doesn’t take hold, it leaves a residue that will attempt to reform itself. Authoritarianism fuels itself through the manufacturing of otherness. It preys on fear to create hate. It is a form of political power that attracts desperate people looking for an escape from their own personal hells, pawns in a game they do not realize is being played.

Authoritarians and their followers decry criticism as stifling their freedoms of speech and expression. The philosopher Karl Popper addressed this through his paradox of tolerance. “Unlimited tolerance must lead to the disappearance of tolerance. If we extend unlimited tolerance even to those who are intolerant, if we are not prepared to defend a tolerant society against the onslaught of the intolerant, then the tolerant will be destroyed, and tolerance with them.—In this formulation, I do not imply, for instance, that we should always suppress the utterance of intolerant philosophies; as long as we can counter them by rational argument and keep them in check by public opinion, suppression would certainly be most unwise. But we should claim the right to suppress them if necessary even by force; for it may easily turn out that they are not prepared to meet us on the level of rational argument, but begin by denouncing all argument; they may forbid their followers to listen to rational argument, because it is deceptive, and teach them to answer arguments by the use of their fists or pistols. We should therefore claim, in the name of tolerance, the right not to tolerate the intolerant.”45

Authoritarianism will expand if the crisis of information, truth, and trust is not addressed through individual and systemic reform. This is further accelerated by our continued descent into the age of crisis. Circumstances where an increase in vulnerable and insecure individuals will occur are almost certain. There is a possibility that some form of authoritarianism will always pervade human society. Opportunistic individuals preying on the destitute to gain personal power aren’t new occurrences in human history. Eliminating the idea entirely is unlikely, given the nearly infinite potential divergences of information in our universe. Limiting its spread is within our power, but only if we are willing to choose alternative forms of organization. This requires creating and implementing systems to develop and nurture the individual’s empathic and intellectual capabilities to a point where they easily reject these ideologies. At the same time, we must consistently revisit our definitions of what is and is not acceptable public speech by law. There is nothing inherently freeing about the open oppression of others so the individual may benefit; to deny this is to empower it.

Consider how social media has changed the information streams we consume daily. For most of human history, the process of receiving new information was incredibly slow. Oral traditions were memorized and spread from generation to generation. For most of our history, the written word was only accessible by a relative few until the invention of the printing press. Even then, it took longer to create and distribute content than it did to consume it, creating a bottleneck in the process that curbed oversaturation.

Today we struggle with the opposite challenge. We are inundated with information to the degree that it distracts us from genuine engagement. Dissemination of content is completed through precise algorithmic targeting; individuals are considered nothing more than profiles to be modified. Our most popular social media platforms operate under frameworks where the primary intent is to manipulate us into acting in ways that serve them. These platforms leverage click-bait media to incite our emotions and targeted product advertisements to encourage us to consume more in these heightened states. These platforms narrow the information we receive that conflicts with our present worldviews while deepening access to content aligning with our existing beliefs. This, in itself, is not a terrible thing; we often prefer engaging with like-minded individuals and groups. However, the price we pay to connect with friends is subjecting ourselves to a model of profiting rooted in information delivery methods that allow advertisers to shift our thoughts and actions ever-so-slightly. We now understand that these behavioral changes are real and measurable46 but occur gradually, so the change in our perception seems almost natural. The crisis of information, truth, and trust spawns from the systems we rely on to expand our humanity through their reinforcing of philosophies of meaning and value that diminish us. Consumerism is a cancer of the human time experience.

The crisis of information, truth, and trust calls into question the very nature of the human experience. Why are we so malleable? Since the dawn of our existence, the individual has taken many forms, constantly adapting and adjusting to the needs of the immediate present. Collectively, we have forgotten more things than any one individual could hope to master in a lifetime. Humanity’s ability to change is our most defining characteristic, which is unsurprising given our inhabiting a universe governed by the single truth. As observers, we embrace knowledge and change our beliefs and actions accordingly. Inspired by our infinite imaginations, we develop a more expansive humanity by expressing our powers of creation to transform the world around us. Our divine powers overshadow an inherent struggle of being one with the relational universe. Information continually shifts our understanding in a specific direction; sometimes we notice, and other times we don’t. At times we embody knowledge, beliefs, and habits that pull us away from the visions we establish for ourselves. The state of insecurity an individual inhabits within a given moment impacts how vulnerable they are to influence in directions conflicting with views and visions they hold dear. We begin to embody the information we consume. After a certain threshold, we become it, directing our focus and energy toward creating its vision and encouraging others to do the same. Our old self becomes lost to a past we can never access. This explains why so many today living in states of fear, anxiety, and anger toward others are those who have been disproportionately impacted by the crisis so far. The crisis of information, truth, and trust reveals our shared vulnerability for what it is: an inescapable part of being within a relational universe.

The human being is in many ways a primal clay, able to reshape itself to reflect its surroundings. We are most powerful when we are actively directing this change through our focus and energy. We are weakest when we are caught in the wave of our time experience, unaware of our power and absorbed in information streams unworthy of our attention. We will always have a crisis of information, truth, and trust within systems of organization that prioritize transaction as the highest form of cooperation. Institutions that allow and promote the proactive confusion and manipulation of the populations they intend to serve warp our time experiences in ways out of alignment with the single truth and the relational universe. We must overcome this crisis because within it, we are increasingly impotent to collaborate around transcending it. Our development of new spiritual philosophies of meaning and value is rooted in a deep trust in the other. To establish that trust, we must reconsider what is and is not acceptable within the verticals of society that connect us to one another. 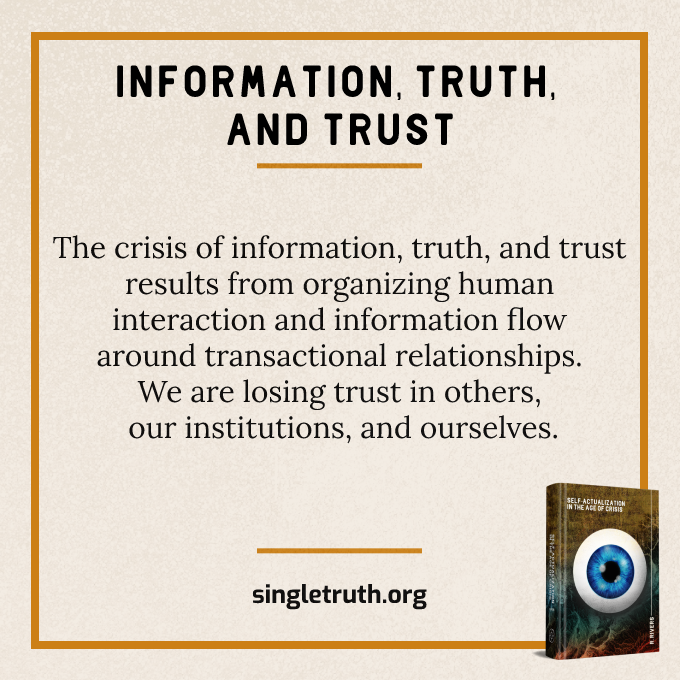 Next Section:
Elected Misrepresentation
Next ➤