The reimagination of our economic, labor, and property arrangements in alignment with the single truth seeks to answer a specific question. What type of person can exist and thrive within the systems we are subject to within the immediate present? Today the answer is “a very specific kind of person.” Systemic actualization shifts that response to “an ever-increasing variety of people.” Our journey toward self-actualization is rooted in a fundamental idea about what makes us human, our ability to become more than the circumstances and worlds we inhabit. Economy, labor, and property play an outsized role in defining our individual relationships with the other. As far-reaching as they are, these systems are finite in relation to the latent infinity within us. Our struggle with being at home in this world is always in relation to the degree to which we are both insiders and outsiders. No other combination of systems defines this struggle as significantly as economy, labor, and property.

The word “economy” is often used in popular media to explain various unrelated systems and circumstances, typically in an effort to confuse or misguide the population. For our exploration, we will define economies as systems of transactions that often repeat themselves. The word “market” is used to describe specific verticals of exchange, such as an agricultural market or a housing market. If we reference “the economy,” we refer to the sum of exchange occurring within all verticals of specific local, national, or global markets.

There are many interpretations of what matters in an economy and what doesn’t, but the predominant focus is the measurement of productivity and debt. Both may be organized in specific ways to create specific outputs, such as favoring one group over another. One of the dogmas we must overcome in order to systematically actualize is the singular narrative of what economy, labor, and property must be. The idea that all forms of transaction should be limited to static rules is self-limiting and out of alignment with the single truth. The economic project of systemic actualization is to more deeply intertwine the relationship between finance and the real economy, prioritize free labor as the dominant form of contribution, and develop more experimental property classifications to serve the former two objectives.

Prioritizing economic, labor, and property systems to favor cooperation over competition rejects the dogmas of present systems. All of these technologies are rooted in the moment of their creation, and no number of incremental improvements can ever change their core design function. Our reliance on markets as a measure of the wealth and health of a nation is inadequate for transcending the age of crisis. The idea that collective society benefits from the dissemination of power into localized oligarchies is demonstrably false, as the majority of people alive today exist in a persistent state of struggle. We must leverage our spiritual connection to systemic actualization to overcome decades of propaganda that have severed our individual concepts of class consciousness. Lifetimes of propaganda have people identifying with and defending the very arrangements that condemn them to permanent cycles of struggle. We acknowledge that the present laws supporting economy, labor, and property are embedded with inequities by design.

National systems of governance are designed to subjugate many for the benefit of the few. We also reject the dogmas shared by many current activists, the wholesale substitution of one system for another. No available -ism is going to save humanity; all are rooted in a past we can no longer access. The idea of eliminating one form of living to support another sits in stark contrast to our understanding of the single truth and the relational universe. Additionally, these fantasies are always tied to the revolution that is right around the corner but persistently fails to materialize. Cooperative systems cannot operate under restrictions that confine relationships and interactions to only minor variations of what already exists. Therefore, any rigid arrangement of law and contract will always be inadequate for a self-actualizing society.

Reshaping the systems defining economy, labor, and property to better align with the single truth and the relational universe begins with understanding why we seek to do so. All social and spiritual philosophies exist in contention with economic orders not rooted in similar value and meaning systems. As we explored in depth in the Age of Crisis chapter, our present arrangements conflict with the core values we seek to embody in our journeys toward self-actualization. Even the most staunchly held spiritual beliefs will erode when subject to a lifetime of interactions with others rooted in contrasting principles and values; such is the nature of a relational universe. The present arrangements have long encouraged behaviors that have compounded into the crisis. They offer no alternatives outside of our present march to oblivion. Our reimagining of these systems of transaction and ownership within human society is fundamental to our journey of systemic actualization. 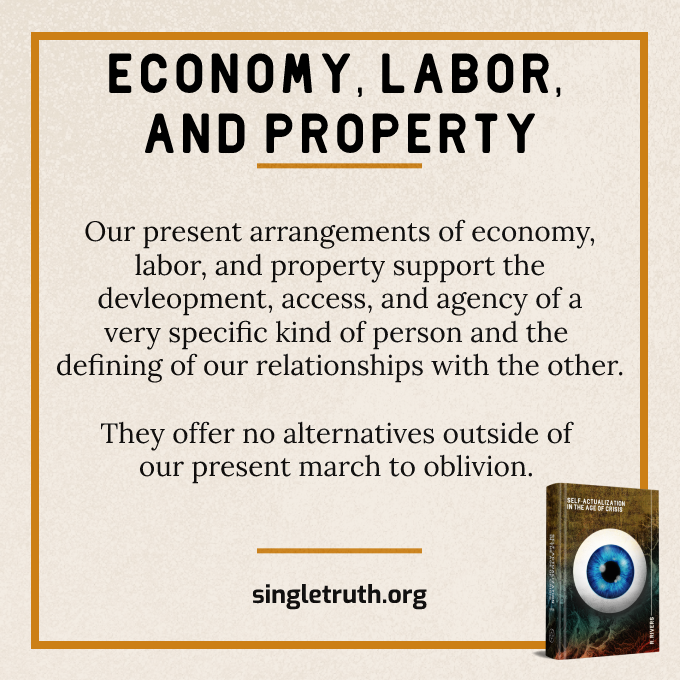 Next Section:
Finance and the Real Economy
Next ➤